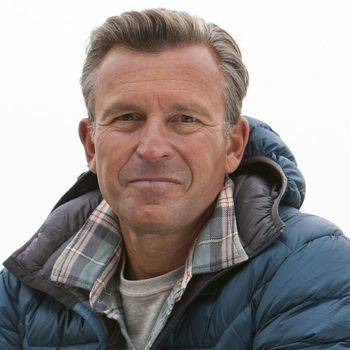 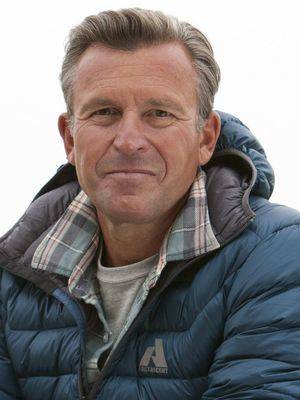 Ed is a speaker who helps audiences learn how to become more successful and overcome obstacles by discussing the lessons he learned as professional mountaineer with over 30 years of experience on the highest peaks in the world. The seven time Everest summiteer shows audiences how to reach higher goals, maintain momentum in the face of hardship and stay at the top of their game.

Viesturs is widely regarded as this country's foremost high-altitude mountaineer. He is familiar to many from the 1996 IMAX Everest Expedition documentary and was featured in Jon Krakauer's bestselling book INTO THIN AIR. In 2002, Ed was awarded the historic Lowell Thomas Award by the Explorer's Club for outstanding achievement in the field of mountaineering. In winning the award, he joined an elite group of climbers including Sir Edmund Hillary.

His speeches are based on his experiences and lessons learned in the mountain arena, touching on subjects such as Risk Management, Leadership, Team Work, Overcoming Major Obstacles, and Decision Making Under Pressure

Viesturs has successfully reached the summits of all of the world's fourteen 8000-meter peaks without supplemental oxygen, an 18 year project he christened Endeavor 8000. His goal was completed on May 12, 2005 with his ascent of Annapurna one of the world's most treacherous peaks. He is one of only a handful of climbers in history (and the only American) to accomplish this. That year Viesturs was awarded National Geographic's Adventurer of the Year.

Viesturs motto has always been that climbing has to be a round trip. All of his planning and focus during his climbs maintains this ethic and he is not shy about turning back from a climb if conditions are too severe. In spite of his conservative attitude Viesturs has been one of the most successful Himalayan climbers in American history. His story is about risk management as well as being patient enough for conditions to allow an ascent. Ultimately, in his words, "The mountain decides whether you climb or not. The art of mountaineering is knowing when to go, when to stay, and when to retreat."

Viesturs is the author of four books. His bestselling autobiography "No Shortcuts To The Top" covers, in detail, Ed Viesturs' career as a mountaineer, how he prepared for his expeditions and his philosophy about how he managed the inherent risks.