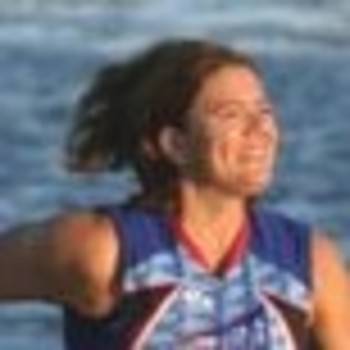 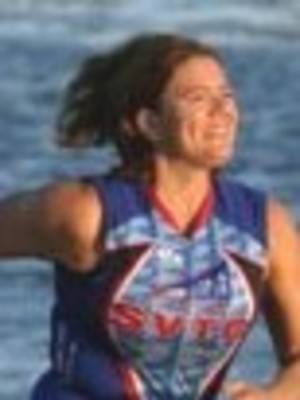 Jayne Williams is living proof that you don't have to be young, lean, super-fit or otherwise exceptionally talented to have fun in triathlon and other endurance sports. Her first book Slow Fat Triathlete: Pursue Your Athletic Dreams in the Body You Have Now was published by Marlowe & Company in April 2004. Go to your local bookseller for a copy and be prepared to laugh until coffee, or your beverage of choice, comes spurting out your nose.*

(*Jayne's mom wishes to register her disapproval of the nasal coffee-spurting imagery above. She says it's crude and will put potential readers off. If you're one of those, please be aware that the book itself is hardly ever crude. But your coffee and nose may be at risk nonetheless.)

Bio In Brief:
"Jayne Williams grew up in the halcyon suburbs of Northern California, began her impractical education in Russian literature at Harvard, and got an M.A. in Slavic Literature from UC Berkeley. She has organized whitewater rafting expeditions in Siberia and around the world and enjoyed years of frantic poverty as a freelance writer, interpreter and editor. She has dabbled in public service and the Internet boom/bust, and lives in Mountain View, California with her husband Tim and their psycho-cat surrogate child."

Tell Me More About That Rafting Thing:
In Reagan's America of early1988, career opportunities for Russian literature majors were a little skimpy. Bored with the stuffiness of academe, I left with no job in hand and got hooked up with a quixotic venture, Project RAFT (Russians and Americans For Teamwork). Project RAFT was, at the time, two guys with e-mail who wanted to promote international harmony through whitewater rafting. Just put Soviets and Americans literally in the same boat on a remote river, and they would learn to work together despite their differences. Oddly, it seemed to work, and I spent three years with Project RAFT, organizing ever-larger trips, acquiring visas, conning airline reps into accepting five rafts and 17 dry bags without excess baggage charges, and interpreting on some of the most bizarre travel experiences of my life.

I don't know how to pick a high point of those years. Was it chowing down on fermented mare's milk and freshly butchered roast sheep in a remote village in the Altai Mountains, about as far from an ocean as you can get in the world? Or was it standing with Jim Fowler's giant reticulated python draped around my neck, translating Br'er Rabbit stories into non-idiomatic Russian in front of 500 inebriated river rats in North Carolina? "Wild Kingdom,": ha! I'll show you wild kingdoms, Jim lad! I know it wasn't the night I spent on the banks of the Zambezi with a badly sprained ankle and a debilitating case of the river cruds. I could barely limp far enough out of camp to avoid frightening the rest of the group with my explosive vomiting and diarrhea. In fact, I believe I could write an entire travelogue about gastro-intestinal distress on four continents.

After leaving RAFT, I took on some freelance projects, the most exciting of which involved traveling around to work on documentaries. One, "A Glorious Way to Die," was a National Geographic special, another, about a rafting festival in Costa Rica, aired on the Discovery Channel. The others, alas, never made it past the research stage, but they involved reindeer-herding indigenous Siberians and the Russian Army's illegal caviar trade in the disputed territory of the Kuril Islands.

Is This At All Relevant to Triathlon?
The rafting and adventuring years have turned out to have many positive effects on my life. One, of course, is that I can tell great gross-out stories. Another, which is really relevant to triathlon, is that most of my tendency to whine about conditions, equipment, or fatigue really got pounded out of me by the good-humored stoicism of my companions, particularly the Russians. Those folks can seriously suffer in the name of fun.

Some American outdoorspersons won't head down the river or up the mountain unless they have the finest Gore-Tex clothing, the most complicated nutritional supplements, and bonded carbon-fiber eating utensils. The Russians will go out in a raft made from truck inner tubes and parachute nylon, wearing canvas tennies, pilfered Aeroflot lifejackets, and wool sweaters. They'll eat gruel, canned meat, and condensed milk for days, and they'll have an incredible time doing it. Hernias and broken bones barely slow them down. So when I started training for triathlon, I knew it was possible to do hard things without expensive equipment, and to have fun while enduring discomfort. It took me a long time to learn it, but it's true.

In fact, now that I'm into the world of the tri, I would love to go back and organize an international triathlon somewhere in Russia, maybe an adventure race in Siberia.

Getting a "Real Job"?
Seeking a little stability and income, I became a contract interpreter, working mostly for the U.S. Department of State, accompanying groups of now former Soviets around America, introducing them to our great institutions like community colleges, the free press, and Wal-Mart. But after I met my future husband, the charm of airports and Marriotts palled, and I moved to suburban Mountain View, California, to be with the guy and to write grants for a job training program. I flirted briefly with the Internet boom, seduced by stock options and visions of grandiose parties funded by venture capitalists, then came back to the public sector.

Working lots of overtime in a cube can really get you fat in a hurry, especially if you like to eat a lot. Always a chunky gal, I gained about 60 pounds in 4 years of sedentary life and cheeseburger lunches, and I developed some nasty hand and arm problems from the endless hours at the keyboard. I was as far from being a triathlete as it is possible to be. I missed the outdoors and my wild, adventurous life. Eventually I started the long, rocky campaign to get thinner and fitter while being outside more, and that path has led me to the tri life.

Where I'm At
Now I am a lot fitter and quite a bit thinner than back in the dark years. I still jiggle where I shouldn't when I'm running, but I'm merely "overweight" rather than "obese." I joined Weight Watchers a while ago to help me check my tendency to eat like a starving frat boy. There's definitely a correlation between the slow, patient, step-by-step approach I have had to take in becoming a triathlete and the patient, every day discipline of learning to eat like a mature adult most of the time.

I don't want to become rail thin, or write a book that exhorts others to become leaner than they maybe ought to be. I just want my weight to be proportionate to my frame. I want to not be able to grab my belly fat with both hands and wiggle it around. These are modest goals, I feel, given our culture's much-documented obsession with the super-thin female body. Mostly, though, I want to have fun and feel strong and fit, belly fat or no belly fat. And I want anyone who feels like it to come along for the ride.