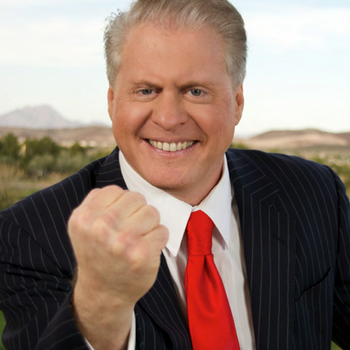 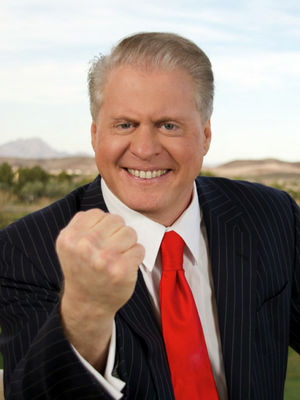 Wayne Allyn Root has been branded by media across the globe as "the Capitalist Evangelist" and "Mr. RELENTLESS" for his energy, enthusiasm and passion for business and entrepreneurial success! His titles include CEO, CR and HEB- for "Chief Rainmaker" and "Human Energizer Bunny." His latest business book, "The Power of RELENTLESS!" was the #1 business bestseller in America, according to CEO-READ. Billionaire business legend Steve Forbes named it as one of his favorite business books of the year in Forbes magazine. The Japanese edition of Wayne's book was just released called "The Indomitable Art of Success."

But Wayne has enjoyed great success in many diverse fields. He was the 2008 Libertarian Vice Presidential nominee. He is a former CNBC anchor-man and host of five shows. He is a media personality and political commentator on national TV and radio. He is a regular guest on Fox News, Newsmax TV, and has appeared globally on BBC World, Canadian TV, Russian TV, Japanese TV and Israeli TV. His syndicated commentaries have been read by millions. He has written many bestselling political and business books.

Wayne is also Creator and Executive Producer of the new TV series, "Las Vegas Law" on Investigation Discovery. It is his 3rd hit series on American television. Wayne started his career as the most celebrated Las Vegas oddsmaker in history. He now has his own 180-pound granite star on the Las Vegas Walk of Stars- one of 70 legends honored in Vegas history. It was named "Wayne Root Day" in the state of Nevada to celebrate his hon-or. Wayne's new radio show "WAR Now: The Wayne Allyn Root Show" airs daily in Las Vegas on 790 Talk in a lineup with Glenn Beck, Michael Savage and Mark Levin.

And as a celebrated TV spokesman Wayne has sold almost half a billion dollars worth of products on American television.

CNBC profiled Wayne's career success. He has also been profiled by
the Wall Street Journal, Success, Fortune, Entrepreneur, Worth, Equities, The Financial Times of London, and The Robb Report. Wayne is quoted non-stop in the American media for both his political and business views.

But Wayne's favorite role has always been as international speaker. Wayne gives speeches across the globe- in the past year speaking in South Africa, Asia and Europe to sold-out crowds and always standing ovations. He is opening speaker at many Donald Trump presidential campaign events. Wayne motivates, educates and empowers millions of entrepreneurs across the globe with his speeches on the topics of success, wealth, entrepreneurship, leadership, salesmanship, sales, marketing, branding and media credibility. His most requested global speech is "Sales, Marketing, Promotion & Branding- American Style!" He is known for his trademark world-class energy and his belief that success comes down to "Always be pitching, never be bitching." He is quite simply RELENTLESS!