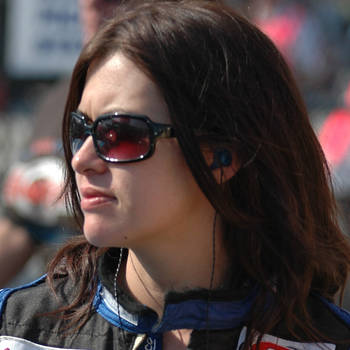 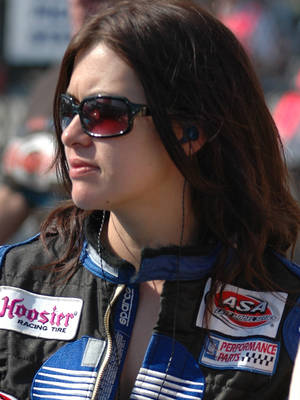 Indycar driver Leilani Munter was born and raised in Minnesota. She holds a bachelors degree in Biology specializing in Ecology, Behavior and Evolution from the University of California San Diego. While attending college she worked as a volunteer at a wildlife rescue and rehabilitation center. She started racing cars in 2001 and spent six years working her way up the NASCAR ranks. During this time Leilani also worked as a race instructor and correspondent for NASCAR.

In 2004 she gained the attention of the racing world when she qualified 4th and finished 7th at Texas Motor Speedway in the ROMCO Super Late Model Series. Texas would turn out to be one of Munter's favorite tracks. She returned to Texas Motor Speedway in 2006 and set a new record when she finished 4th, the highest finish for a female driver in the history of the racetrack. By December 2006 Leilani had raced her way from the short tracks of southern California all the way to the most iconic NASCAR track of them all, the high banks of Daytona International Speedway. She completed her rookie ARCA test at Daytona and even though she was with a small underfunded team, she was 24th quick of 57 race cars testing at Daytona.

In 2007 Leilani received a life changing call from an IndyCar team and later that year she became the fourth woman in history to race in the Indy Pro Series, the developmental league of IndyCar. She impressed the open wheel racing world when she qualified 5th for her debut. Leilani was running in the top six when a multi car accident took her out of the race. Her racing accomplishments have landed her on five magazine covers and in the pages of Italian Vogue, Esquire, Sports Illustrated and USA Today. She is no stranger to television either, with appearances on NBC Sports, National Geographic, and ESPN.

Leilani purchases an acre of rainforest for every race she runs to offset her carbon footprint and has been a long time vegetarian and eco activist. She is politically active in the legistlative fight for the environment and in 2008 she went to Capitol Hill to speak with Congress on behalf of climate issues.

Many media outlets find it interesting that Leilani once worked as a photo double for actress Catherine Zeta-Jones and that her older sister Natascha is married to Grateful Dead guitarist and singer Bob Weir. Her hobbies include scuba diving and snowboarding.

SPEAKING
Leilani is an accomplished speaker in a variety of venues. She was a trackside correspondent for three years at NASCAR.com, reporting live from NASCAR Nextel Cup races, including Daytona. She has appeared on a variety of television shows including National Geographic On Assignment, FOX Sports, NBC Sports and was a guest host on Spike TV. She was also the solo host of a season of "Auto Primer" on the DIY Network. Leilani is no stranger to radio either, she was a correspondent for ESPN Radio, reporting on the NASCAR Nextel Cup Chase for the Championship.

Leilani has been a keynote speaker for a variety of organizations where she speaks about courage, motivation, dedication, diversity, integrity, and perseverance. Her experience as a successful woman in a male dominated sport gives Leilani unique insights on why sometimes it's good to be different in this world. She shares her transformation from biology student to race car driver, and her struggle to race her way from the short tracks of southern California to the high banks of Daytona and finally, to becoming the fourth woman in history to race in the Indy Pro Series.