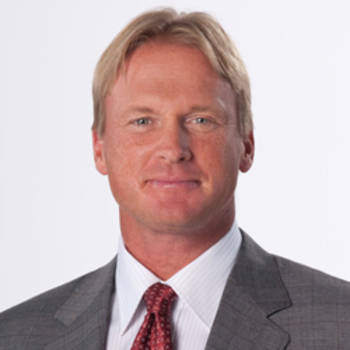 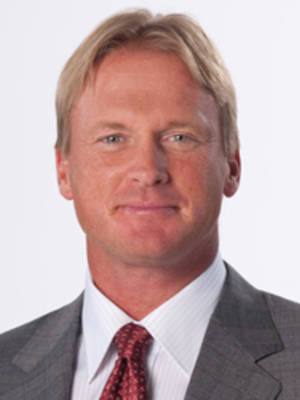 Jon Gruden, whose limitless passion and relentless work ethic guided the Oakland Raiders to division titles in each of his final two seasons, was named the seventh head coach in Tampa Bay Buccaneers history on February 18, 2002.

Gruden, the NFL's youngest head coach at 38, steered the Raiders to a 38-26 regular season mark in his four seasons (1998-2001) with the club, including postseason appearances in 2000 and 2001. Under Gruden, the Raiders advanced to the AFC title game in 2000 and lost this year in a second round playoff game to eventual Super Bowl champion New England. Gruden's offenses have finished among the league's Top 10 in each of the last three seasons, including fifth in 1999.

The 2001 Raiders ranked seventh in the NFL total offense, including fourth in passing offense, on their way to a second consecutive division title. Oakland won its first back-to-back AFC West crowns since 1982-83. The Raiders also ranked first in the AFC in red zone touchdown percentage and Pro Bowl QB Rich Gannon was the conference leader in passing, throwing for 3,828 yards and a completion percentage of 65.8. Over the past three seasons under Gruden, Gannon has totaled 949 completions on 1537 attempts (61.7%) for 11,098 yards with 79 touchdowns and just 34 interceptions.

Five Raiders were named to the 2002 Pro Bowl squad, including WR Tim Brown, who made his ninth trip to Hawaii this past season. CB Charles Woodson made his fourth consecutive trip to the Pro Bowl, while Gannon, who led the AFC with a 95.5 QB rating, headed to Hawaii for the third straight season. Gannon was named the game's MVP in each of the last two contests.

The Raiders ranked among the NFL's elite in offense, defense and special teams under Gruden's leadership in 2000, advancing to the AFC Championship Game. The offense led the league in rushing at nearly 155 yards per game and ranked third in the NFL in scoring at almost 30 points per game. Oakland's 58 touchdowns were tied for the second-most in the league. The Raiders ranked fifth in the NFL in rushing defense (96.9 rushing yards allowed) and fourth in the AFC (seventh in NFL) in takeaways with 37. The Raiders led the NFL in touchbacks (15) and in net punting average (38.0). Gruden and his staff also coached the victorious AFC squad in the most recent Pro Bowl.