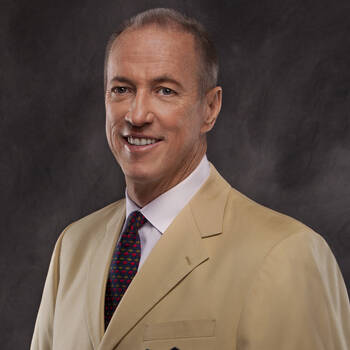 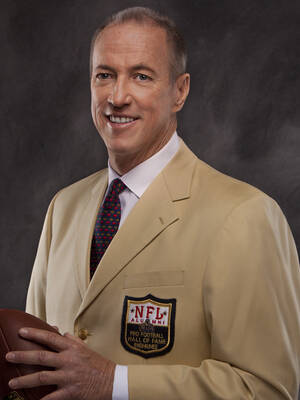 NFL Hall Of Fame Quarterback Jim Kelly exemplifies what toughness is all about. From a young boy in the small town of East Brady, PA to his days as a star quarterback in the National Football League, Jim has shown courage to overcome every obstacle he has faced.

He led the way for other quarterbacks at Miami University - what became known as "Quarterback U". Others who followed in his footsteps: Bernie Kosar, Vinny Testaverde and Steve Walsh. From Miami, Jim Kelly led the Buffalo Bills to four consecutive Super Bowl appearances and established himself as one of the all-time greatest quarterbacks to play the game.

In August of 2002, he was enshrined in the NFL Hall of Fame, ranking eighth in NFL history in passing efficiency. He is 12th in career completions, 12th in passing yards and 16th in touchdowns. He holds virtually every Bills passing record. Only 51 of the 216 men in the hall made it in the first year of eligibility and Jim Kelly did so with his arm and his courage to lead.

But nothing could prepare Jim and his wife, Jill for the battle that they would face a few months after Jim's retirement in January of 1997.

At six months old, their son Hunter was diagnosed with a life threatening illness, Krabbe Disease (Globoid-Cell Leukodystrophy). Doctors did not expect Hunter to live past the age of two but through love, support, and courage, Hunter surpassed expectations and celebrated eight years of life. Hunter passed away in August of 2005. In 1997, Hunter's Hope was established by Jim and his wife Jill in honor of their son. To date, the foundation has awarded over $14 million to Leukodystrophy and other neurological disease related research.

Through it all, Jim Kelly and his family have prevailed. Their story is one of True Courage.