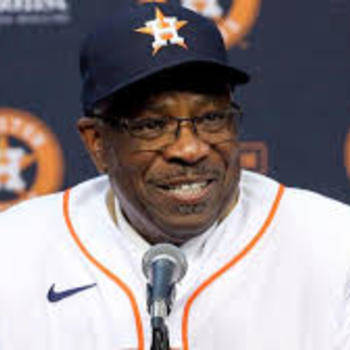 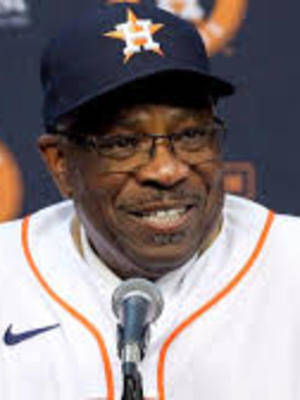 A legend in baseball, Dusty Baker is the only a 3-time Major League Baseball Manager of the year in Major League history, a former All-Star as a player, and a former Marine. Dusty is a bilingual speaker (English & Spanish) who talks about leadership, teamwork, motivation, and success.

In 2022, Dusty became the 12th manager in MLB history to win 2,000 games. He is the only coach in MLB history to lead five teams to the post-season, the San Francisco Giants, the Chicago Cubs, the Cincinnati Reds, the Washington Nationals, and the Houston Astros.

Drafted by the Atlanta Braves in the 1967 amateur draft out of Del Campo High School near Sacramento, CA, Dusty Baker began his professional baseball career as an outfielder for the Braves in 1968. After spending sixteen full seasons with the Atlanta Braves, Los Angeles Dodgers, as well as a short tenure with the San Francisco Giants and Oakland Athletics, Baker finished his prosperous career as a player with .278 batting average, 242 home runs, and 1,013 runs batted in.

Baker's coaching career started with his former Dodger arch-rival: the San Francisco Giants. Baker began his coaching career as a first base coach for the San Francisco Giants in 1988, and then spent the following four years (1989-1992) as the hitting coach before taking over as manager in 1993. In his very first year as Giants manager, he won the N.L. Manager of the Year award, leading the team to a 103-59 record, which was the second-best record in baseball that year (behind the 104-58 Atlanta Braves). His Giants went on to win division titles in 1997 and again in 2000 after which Baker was honored as Manager of the Year for both years. In 2002 the Giants gained the Wild-Card berth and from there advanced to the World Series where they lost in seven games to the Anaheim Angels.

In 2003 Baker left the Giants to join the Chicago Cubs, where he made a major impact in his first season as manager. With the help of an impressive pitching staff and big gun batters such as Sammy Sosa and Moises Alou, the Chicago Cubs were able to claim their first divisional title in over a decade.

In 2004, the team was involved in a heated wild card chase with the Houston Astros but fell out of contention near the season's end. In the subsequent season, the Cubs lost several of their key players, most notably ace pitchers Mark Prior and Kerry Wood, to injuries. The team finished the season with a 79-83 record, marking the first time in three years that the Cubs finished with a losing record. Baker left the Cubs following their 2006 season and subsequently spends time as an analyst for ESPN.

Baker's hobbies include hunting and fishing and he is fluent in Spanish. He founded the Dusty Baker International Academy of Baseball in Sacramento and is supportive of many local charitable organizations.